Tibet: a window into an ancient kingdom

First things first: it isn’t easy to get a visa and wander into Tibet (or the Tibetan Autonomous Region of China, as it is now known). I visited as a guest of the Chinese Tourist Board and being part of an organised tour is really the only way to see this esoteric gem nestled in the dizzying heights of the Himalayas.

I combined my travel to Tibet with some highlights of China on an itinerary similar to this tailor-made holiday Pandas and Buddhas of Szechuan. There are a number of small group tours on offer that include Lhasa and the surrounding monasteries with the path through the Himalayas to Kathmandu: Explore Tibet, which can be started from Nepal or China or even by train from Beijing; alternatively, The High Road to Tibet includes a flight from Kathmandu in Nepal. However you decide to get there, I would thoroughly recommend including Tibet in your travel plans!

Arriving in Lhasa, the roof of the world

The flight from China into Tibet has to be one of the most exciting I’ve ever taken. As we cruised over the impressive snow-capped peaks below we tried to pick out the mountains and kept wondering ‘could that one be Everest? Or what about that one?’ Pools of turquoise water and some of the most isolated places on the planet quickly make you feel like you’re flying to the ‘rooftop of the world’ as Tibet is known.

As soon as you get off the plane, the sensation of altitude hits you in a most curious way. Tibet is over 5,000 metres above sea level with an elevation of around 3,650 metres and nothing prepares you for that first attempt to gasp a breath and feeling hardly any air go in. It may sound scary, but our group ranged in age from 30 to over 60 and we all took care of each other so nobody suffered badly.

On arrival, we were presented with ‘Khatas’ (white silk scarfs representing purity), and introduced to our Tibetan tour guides. They had the most beautiful, glowing, bronze-red faces - signs of a life lived far away from the screens and city lives of their western counterparts.

Boarding the bus, I looked up and noticed that the October sky was bluer than I’d ever experienced. Looking down, every single puddle, stream or lake we passed was casting the most clear and high definition reflections. This is a world like no other.

When we arrived at our hotel, I noticed an addition to the usual minibar and facilities - we also had oxygen cylinders at our disposal! Some of the group elected to rest, but I went straight out to find a tea house and a place to watch the world go by in this enchanting new realm!

Potala Palace: legacy of the Lamas 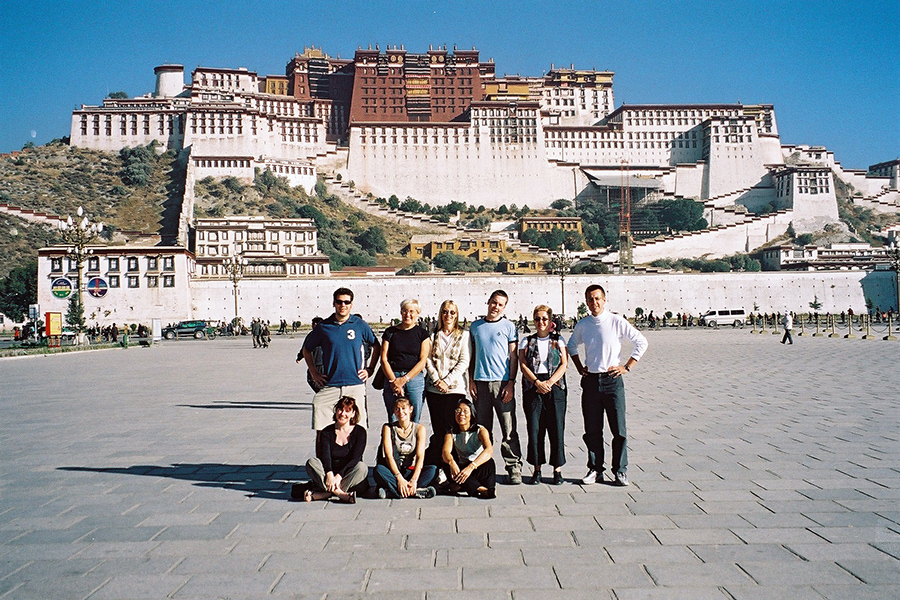 The iconic Potala Palace which was home to the Dalai Lama for centuries sits proudly, viewable from all angles in Lhasa. No matter how many photos you’ve seen, you’ll feel impressed when standing before it, even if it has been transformed into something resembling a grand museum.

Set politics aside because once inside, you’ll uncover the history and rich culture that simply oozes from the walls. You’ll see pilgrims from all over Tibet flocking here, whirling their prayer wheels, chanting incantations and fully prostrating themselves before its majestic beauty.

The sheer opulence is impressive; the golden Buddhas, the tapestries, the glorious paintings, the thangkas (representing the wheel of life) and the smell of slow burning juniper and ubiquitous yak butter lamps which flood your senses.

As I entered, I felt humbled by the joy of the pilgrims who looked like they were fulfilling a life time ambition, each clutching their packages of yak butter to add to the candles and bundles of small-denomination notes as an offering. 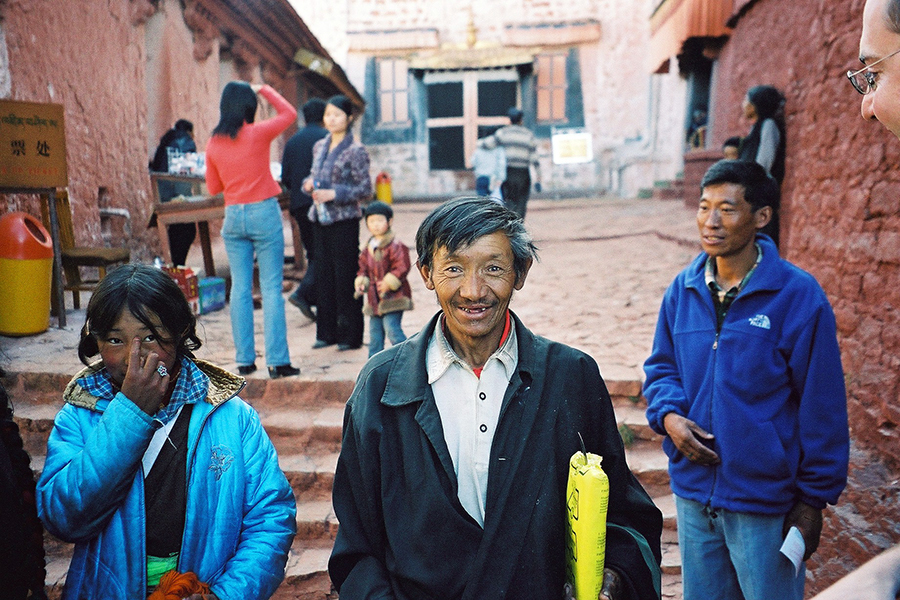 Many of the pilgrims walk for days to arrive here and I felt so privileged to be amongst them. As we weaved our way through the maze-like building admiring the riches and jewels and ascending the 13 stories (an ancient predecessor of the skyscraper!), I could imagine a young 14th Dalai Lama surveying the surrounding landscape from the roof top (as depicted in the Brad Pitt blockbuster, ‘7 years in Tibet’).

A 15-minute walk from the Potala Palace will bring you to Tibet’s holiest temple, Jokhang, believed to have been built in the 6th Century.

On the way here, you may see the agonising sight of pilgrims dressed in rags dragging themselves in prostration towards the temple, with huge blocks of wood attached to their hands to stop the skin wearing through. 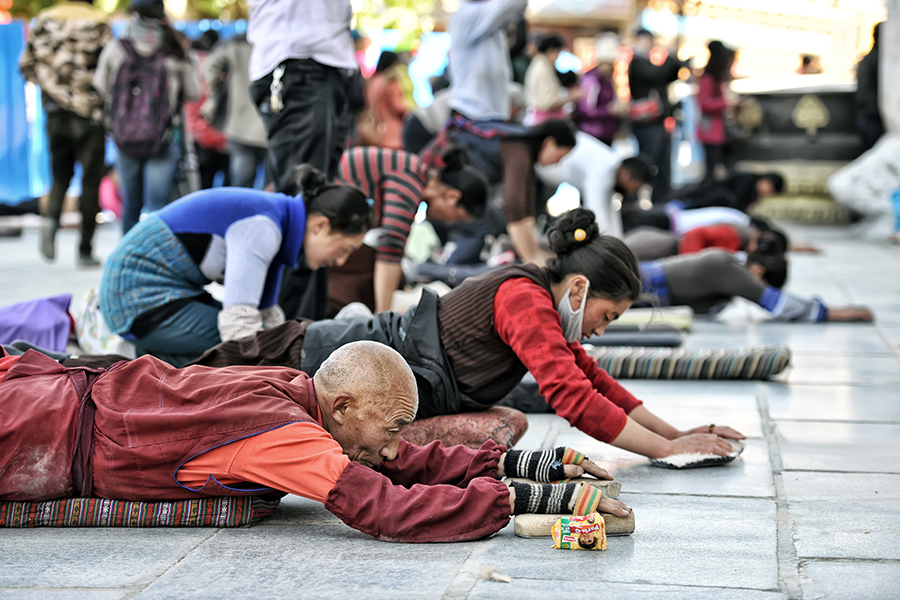 The Bharkhor market sells all manner of things from ornate china tea cups to prayer flags all in neatly and peacefully organised stalls, leading towards the temple entrance. As you get close to the entrance you smell the burning yak butter candles and begin to sense the mounting excitement from those around you who have travelled so far to complete their pilgrimage.

Inside, the density of the air combined with the array of jewels and objects of worship flood your senses once more. You’ll see many practices of Tibetan Buddhism are carefully observed, from the stroking of rosary beads, to the use of prayer wheels and prayer flags which contain sacred writings and when rotated or sent flapping on the Himalayan breeze send out prayers. 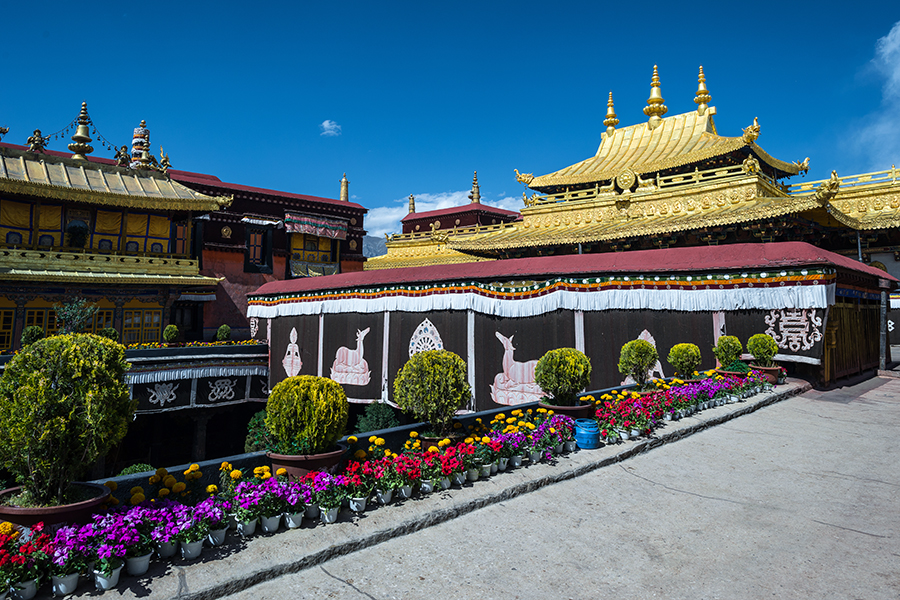 If you’re not already overwhelmed by the mind-blowing concentration of beautiful temples, palaces and monasteries in central Lhasa, a short and scenic bus journey can ensure that you’re properly surrounded.

One of my highlights was Sera where after admiring the Buddhas and artwork, we emerged into a courtyard bathed in crisp, mountain sunshine. For once, it wasn’t the air or scenery that caught our attention, but instead the sound of lilting shouts, slaps, claps and general kerfuffle. We’d found the place where a bunch of young apprentice monks clad in deep burgundy coloured robes get to mull over their morning scripture lessons. By ancient tradition, they fire off a series of gestures, sounds and movements to illustrate the dawning of their understanding and questioning. 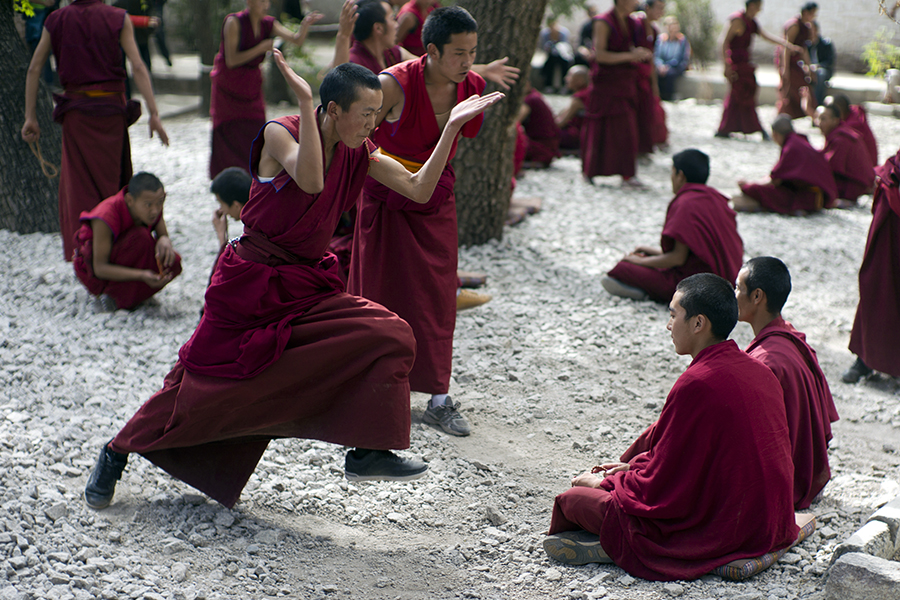 If you venture further into the barren landscape, you’ll pass yaks, lakes and postcard perfect skies, and perhaps encounter monasteries like Samye and Drepung that have no contact with the western world. Be warned though, such pure experience does come at a price… the outside squat toilet facilities are not for the faint hearted!

We encountered another somewhat grizzly experience at Ganden monastery. A few hundred metres from the living quarters, there was a small gathering and the fluttering of reds and orange robes against the rocky grey palette, with circling vultures overhead. In keeping with Buddhist ideas of the soul passing on through reincarnation, we were witnessing a traditional ‘sky burial’. 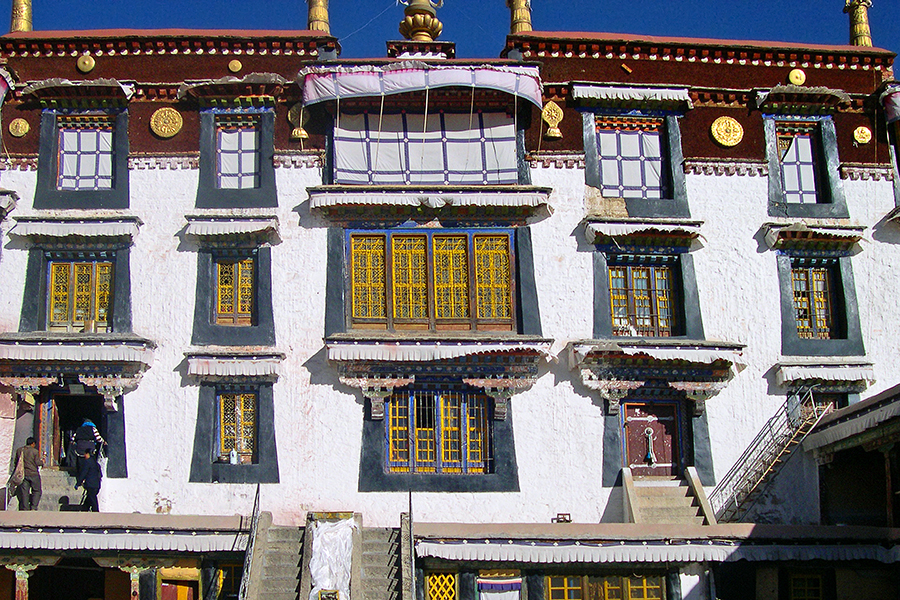 Here we learned from young monks about the art of sand mandalas, intended as a reminder of the transience of life. The artist spends hours, even days creating spectacularly intricate designs from all different coloured sands, only to let the wind blow the sands away to leave behind a ‘blank canvas’.

It’s not all spirituality, monks, pilgrims and temples. You’ll find Lhasa has an increasingly vibrant night life too. After a day at high altitude of walking and learning about ancient religious traditions, what better way to blow off a bit of steam that to join Chinese tourists and locals for a sing song with a few beers and a karaoke session? After all, it would appear that Bohemian Rhapsody is known globally!

If you would like to visit Tibet, I can offer lots of recommendations based on my own experiences there. Whether you’d like to make an exclusive holiday there, combine with Nepal, China or a bigger Asian itinerary, I can help coordinate. I can arrange flights to Tibet and Nepal or help you work out how to include Tibet on a round the world ticket. Call Stewart on 01273 964 029 or email [email protected].

About the author Stewart Oak

The best places to visit in South India