Stopping over in Mexico City

Mexico City is North America's highest city, and is famous for being one of the world's most densely populated. Despite its reputation as chaotic and frenetic, there’s plenty of places to discover historical gems and plenty of green, open spaces to retreat to.

Home to world-class museums and galleries, palaces and cathedrals, historical ruins, attractive squares and modern skyscrapers and shopping, this city has a lot to offer. Watch the busy-ness around you with the solace of a cup of coffee, listen to a Mariachi band or take yourself off to the backwaters to see the city from a boat. Here are our tips for stopping over in Mexico City…

Mexico City’s International Airport is six miles (10km) east of the city. We can always arrange your airport transfers for you, but if you want to make your own way, the easiest option would be the Metro subway which links the airport to downtown, or you can take a taxi. Taxis are regulated and passengers can pay in advance at the taxi counter in Arrivals.

At night, don’t hail a taxi from the street, use the hotel or restaurant to arrange for you instead as this is much safer – it’s generally considered safer to have your hotel call a taxi than to use one of the (cheaper) prolific green Beetle cabins you’ll see everywhere. For years there have been stories of tourists being mugged in the green taxis – just be aware of the risk if you take one.

The city itself is easy to get around using metro, buses, trolley buses and minibuses (peseros or colectivos). The metro is the fastest and easiest option. Buses are reliable, but can be more complicated for non-Spanish speakers. All public transport is heavily crowded during peak hours and is best avoided at this time. The peak-time overcrowding on the metro puts even London to shame – start planning to get off about 4 stops ahead and you might just make your own stop!

The no-frills guest houses provide the cheapest rates, and some of the most reasonable places are in the Centro Histórico. Some of the more well-known international chains are concentrated in Polanco and the Zona Rosa. For midrange options featuring restaurants and bars, the Alameda and Plaza de la República areas are where you need to look, although though they tend to lack character and opt for neutral modern comfort, otherwise head to the trendy Roma and Condesa neighbourhoods if you are looking for hostels or chic boutique hotels.

What to see and do – our favourite picks!

Mexico city’s contemporary and colonial flavours are evident everywhere - soak up the atmosphere and architecture of downtown Mexico City, head to Plaza Garibaldi-Mariachi for some café culture and people watching, learn about the history of the Aztecs at any of the great museums on offer.

El Zocalo
The second largest city square in the world, El Zocalo is the central gathering place of the city. It’s always filled with activity and is a good starting point for exploring the city – you might even catch a free gig if you’re lucky – everyone from Shakira to Justin Bieber to Paul McCartney has performed a free live gig here!

Bosque de Chapultepec
The city’s largest and most popular park houses everything from a zoo, sculptures and monuments and several museums including the impressive Museo Nacional de Antropologia and the Chapultepec Castle.

Frida Kahlo Museum
Mexico city’s famous artistic alumina include both Diego Rivera and Frida Kahlo. Make the pilgrimage to the ‘Blue House’; home and studio of Frida Kahlo, which has since been converted into a museum.

San Angel
Wander through this colourful neighbourhood of cobbled streets and colonial houses home to several museums of interest and the former monastery complex El Carmen. Make sure you have a Saturday factored into your timeframe, so you can head to this Saturday bazaar (Bazar Sabado) which showcases some of Mexico’s great handicrafts and artisans. Make sure to take your camera as this is area is a photographic delight!

You can pass a peaceful afternoon being escorted around in a beautifully colourful wooden barge to the sounds of Mariachis playing traditional Mexican tunes. The network of waterways in Xochimilco is a fascinating insight into the lives of locals as you ply past houses and gardens of the city’s residents. The equivalent to punting on the river in Oxford or Cambridge! 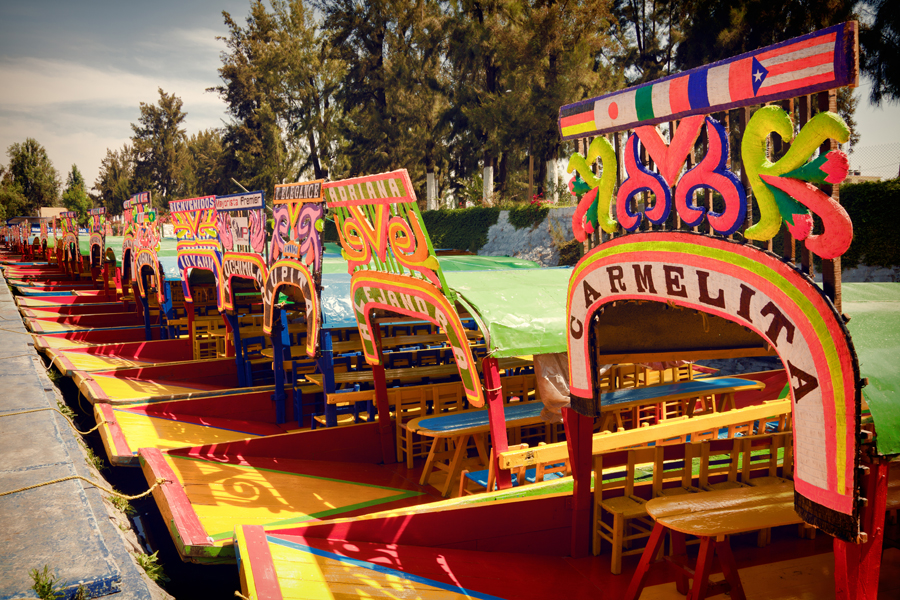 Teotihuacan ‘a place of the gods’ is the site of Mexico’s largest ancient city. Another UNESCO World Heritage site dating back to about 300-600 BC, this is a site you shouldn’t miss if you have some time in the city. It’s about an hour from the city by bus.

Tepotzotlan possesses a magical energy that will recharge your batteries after the frenetic chaos that can be Mexico City. Head to the breath-taking geography of this sheltered and relaxed town to chill out and unwind and soothe your soul. Located 1.5 hours by bus from Mexico City.

Puebla is known for its food. World famous for its ‘mole poblano’, pecan and pine nut fudge and sweet potato based desserts, head to this delightful Baroque city of angels to seduce your palate. It’s about 2 hours away by bus.

If you’d like to include Mexico City in your multi-stop ticket, we can help. If you’re travelling around Mexico, time your visit to the beginning of November and you can include a stay in colonial Pátzcuaro in the Western Highlands in time to see the celebrations for Día de los Muertos (‘Day of the Dead’). And any time is a good time to squeeze in a visit to the Yucatán peninsula with its beaches and Mayan sites.

We can arrange multi-stop flights to Mexico, transfers and accommodation to suit your style and budget – just call us or request a quote by email to start planning your trip!