Stopping over in Hong Kong: where to stay and what to do

Whether it’s your first visit, or like me you’ve been multiple times, Hong Kong always lives up to its powerhouse reputation. Vibrant, crowded, dazzling and delicious. In my opinion it’s a city that never disappoints.

Street names in English, double decker buses that wouldn’t look out of place in your hometown, a satellite town called Aberdeen. This place feels familiar. Don’t be confused, you have landed in China – all will become clear. It’s very much Asia with a good old dose of British-ness thrown in. Luckily that doesn’t mean Hong Kong has become a gigantic version of Benidorm; you could not be further from the truth.

You may have heard many people describe the city as a mix of 'east meets west' and that’s pretty close to the mark. This is one unique and fascinating modern city that makes a great choice for a quick stopover.

A well-connected stopover for Asia and Australasia

If you have the opportunity, I'd recommend adding Hong Kong to your itinerary. As a major world hub, it’s possible to unlock the door to many a destination from here. Fall in love with the city and then set off to explore other Asian gems. It’s so easy to travel on to places in mainland China, Taiwan, the Philippines, Borneo or Japan. If you're travelling further afield - Australia, New Zealand and Fiji are a direct flight away, so Hong Kong is a true gateway city, and one you can easily explore in 3 or 4 days.

Hong Kong is split by the imposing Victoria Harbour, so you’ll need to decide whether to stay on Hong Kong Island or Kowloon. The city has a huge range of accommodation options. There’s no right or wrong answer and I’ve stayed on both sides. Kowloon has more traditional feel and is full of temples, markets and street food. Metropark Hotel Kowloon or Novotel Nathan Road offer great value in the heart of Kowloon.

Hong Kong Island boasts more skyscrapers and is possibly the heartbeat of the city. Metropark Causeway Bay is located in the leading entertainment district, whilst I can highly recommend the view and comfort at the Harbour Grand. Whichever side you choose, it’s really easy to get between the two. Overall the transport network is clean, easy and efficient. Take the underground or my personal choice - the Star Ferry. It’s a Hong Kong icon and the 10 minute harbour crossing costs just pence. The views are spectacular and you won’t regret it!

What to see and do

As with any major city, there is a bucketful of things you’ll want to tick of your list. The breath-taking views (and steep tram ride) looking out from Victoria Peak, the chaos of Temple street night market, take in A Symphony of Lights - a multimedia light show that twinkles above the harbour each night. Why not take in afternoon tea at the Peninsula hotel? Forget eating in The Lobby, head up to Felix restaurant on the 28th floor for spectacular views across the harbour. Maybe you’ll want to shop until you drop in one of the gigantic shopping centres, or simply find an old fashioned traditional tailor. 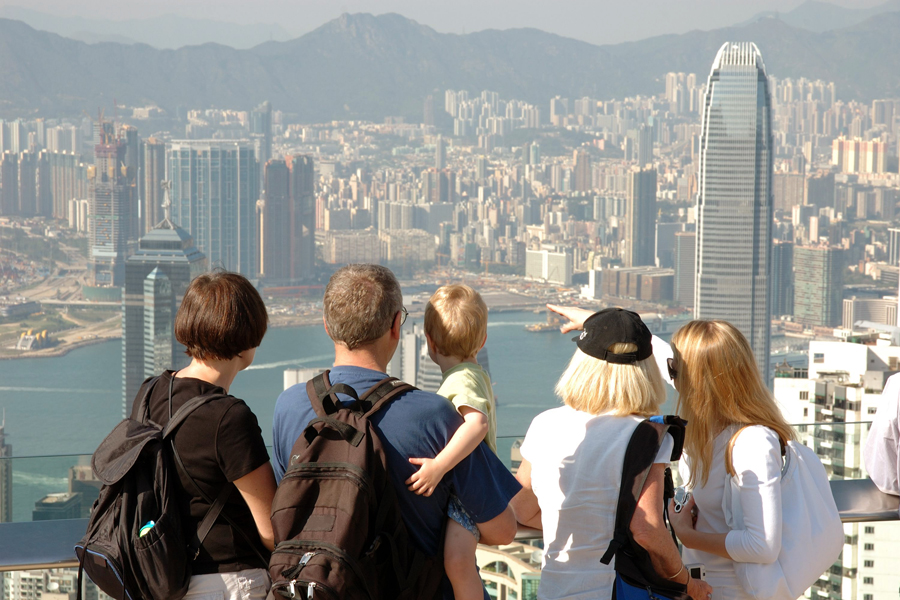 Hong Kong is a city to explore. Just walk around and you will unearth something fascinating or unexpected. Choose an area and just see who and what you come across. Some of my favourite personal experiences are popular with, but not necessarily swarming with tourists. That’s the best way to discover a city.

Escalators - more of an attraction than you might think!

If someone said that escalators would be an attraction, then you might think they were in need of a little help. Stay with me here! Hong Kong is steep and hilly, take a look at the Mid-Town escalators in the Central District. These are the longest covered escalators in the world and cover an elevation of over 135 metres. It’s a really strange sight but fantastic for looking after weary legs. Dotted in amongst are the packed bars and restaurants of Soho, and intriguing views of the wet markets and Dai Pai Dongs (street food stands) on the streets below. Once at the top amid the towering residential skyscrapers perched on the hillside, you can zig zag back down through the busy streets. Be sure to pick up a Hong Kong egg custard tart as you take in the sights and smells of this district.

Panoramic views of the city from the cable car

Got even more of a head for heights? The Ngong Ping cable car is the perfect ride for you. You won’t be the only tourist here, but it’s an exhilarating ride over 3.5 miles and offers spectacular 360 degree panoramic views. 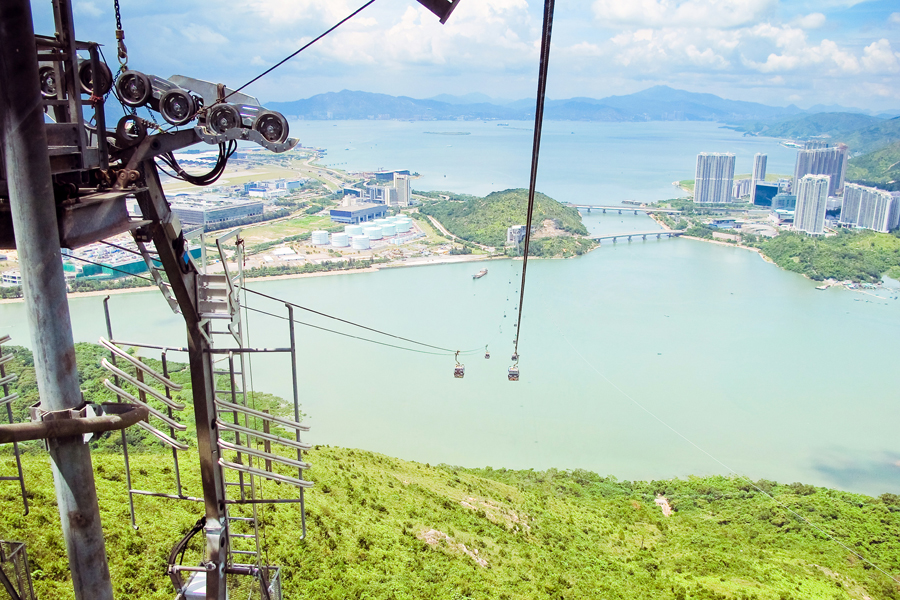 Pay a little more for a glass bottomed car if you really want to see everything! When you reach the top, make a bee line for the Po Lin monastery and Tian Tan Buddha statue. This Big Buddha dominates the skyline and is well worth the journey. 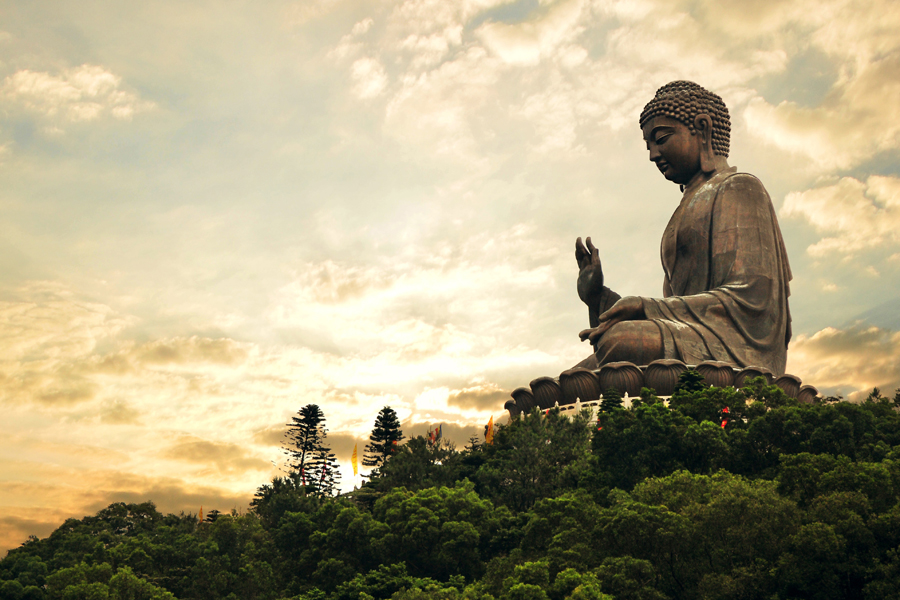 Everybody loves a temple in Asia. Jump on the metro at Jordan station and head out towards Tai Wai. Being lucky is a big thing in China and people flock to Che Kung Temple at Sha Tin for their daily fix. Whether you are looking for love, money or anything in-between, simply spin the bronze wheel  three times for more luck than you can shake a stick at!

Food plays a big part in my travels and Hong Kong does not fall short in that department. Make sure you sample the mouth-watering BBQ pork dim sum at Tim Ho Wan. This is Michelin starred cooking at bargain prices. It’s tucked away in Mongkok, and make sure you get there early – long queues build up by 10am. You might have to wait 2 or 3 hours, but this is a treat worth waiting for. Don’t feel that you have to be confined to the urban sprawl - there's plenty to discover within an hour or so of the city.

Take the one hour hydrofoil trip from Kowloon to Macau, an ex Portuguese colony that's now the Las Vegas of Asia. Big name casinos sit alongside small buildings that could be imported from Lisbon. It’s surreal and a world away from Hong Kong. One tip, if you come here during Chinese New Year, prepare to be engulfed by bus loads of Chinese day trippers. Gambling is illegal in mainland China, and Macau has become their playground. It can be very busy but also incredibly amusing watching the new money and the bling that it brings! A lot of people don’t actually realise that the skyscrapers of Hong Kong Island are surrounded by mountains, ancient footpaths, deserted beaches and temples. The rural land between Kowloon and mainland China is known as The New Territories and offers a tantalising view of a life outside the city. Public transport makes this really easy to explore and well worth your time.

How to including Hong Kong as a stopover

Hong Kong is a major Asian hub, so it's easy to reach as part of an Asia multi-stop ticket or a pitstop en route to Australia, for example: