Feeling a bit second-class because you're flying economy? It doesn't have to be that way - now you can say goodbye to cramped economy seats and bag yourself a little inflight luxury - without upgrading to Premium Economy.

Which is the only airline to give you feet-up comfort in Economy Class? The answer is Air New Zealand. Our team had the opportunity to try out Air New Zealand's Skycouch for themselves - and for comfort, it gets the thumbs up from us - take a peek...

If you fly long haul, you'll be acquainted with that sensation of feeling trapped that tends to kick in post-drinks and post-meal when you're rifling through the entertainment trying to find something engaging to see you through the next 10 hours. And if you've travelled with kids, odds are you've sacrificed your own comfort so that they can sleep across your lap, at your feet or draped over two seats, so listen up...

The Skycouch - your sofa in the sky

The good news is that Air New Zealand have introduced the Skycouch to a number of their economy (yes, you heard right - economy) flights. If you book a row of three seats for a small supplement, you'll be able to push a button and a footrest will pop up along all three seats to create a sofa in the sky where you can all spread out, lie down and generally enjoy some of the comfort generally reserved for travellers in higher cabin classes. Brilliant!

Here are some pics of us trying it out:

Mark and Sean looking rather close when they tried out the Skycouch - but since they're both parents who fly with kids, I think we can call this shrewd market research.

And after trying out the Skycouch - we also tried out the Premium Economy seats to: 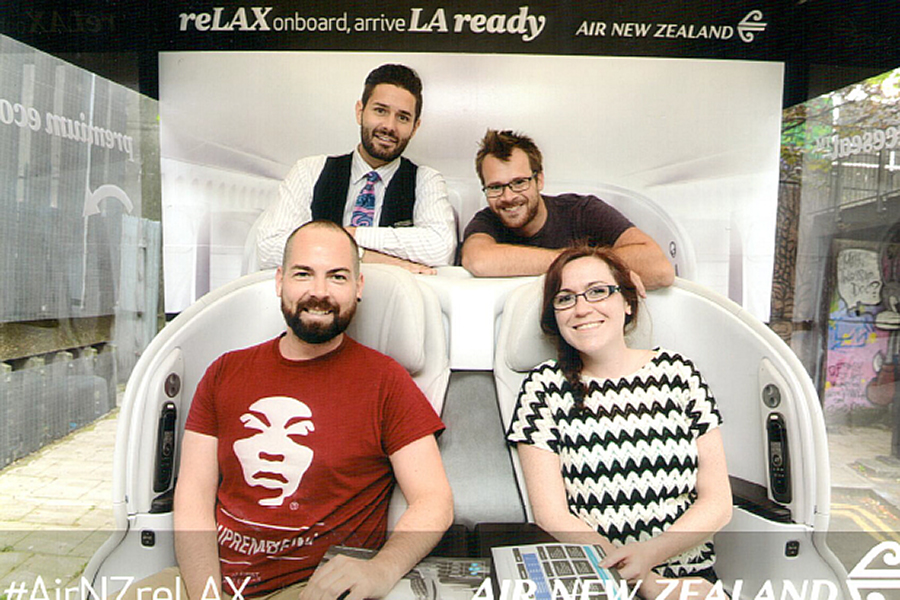 The Economy Skycouch™ is available on their 777-300 long-haul services, and in future will be introduced on their new 787-9 Dreamliner and 777-200 refurbished aircraft. You can find out which routes operate with the Skycouch and see a demonstration on Air New Zealand's site.