How to have your own James Bond experience around the world

There’s something ridiculously intriguing about the places they visit in James Bond movies. You hear the orchestra strike up those two dramatic opening notes before the launching into that familiar theme and then you’re transported. I’ve lost count of the number of destinations I’ve watched in Bond movies and the amount of time I’ve spent googling how to get there and do something similar (just me?).

Off the back of that, here are my ideas for how you can have your own James Bond experience in some of the places he’s been to.

1. [Spectre] Take part in the Day of the Dead festival, Mexico

The latest bond film, Spectre, opens in Mexico City with atmospheric shots of the Día de Muertos or 'Day of the Dead' celebrations. Day of the Dead is widely celebrated in Mexico on 31st October, which is the day when family create private shrines to celebrate and remember their dead relatives by leaving gifts of food, skulls and marigold flowers. It’s a strange blend of the macabre and fun which has taken off around the world.

Get the James Bond experience in Mexico: although you will see some evidence of the Day of the Dead festivities outside of October – I saw some decorated graveyards on Janitzio island in Michoacán during August -  the main time to visit and get involved is at the end of October. Mexico's Day of the Dead in Oaxaca gives you a chance to explore Mexico and see a folkloric parade with some of the traditions Bond saw in Mexico City. It departs 28/10/15 – there are spaces for this year and next.

2. [Skyfall] Swim against a backdrop of the Shanghai skyline

In Skyfall, Bond heads to Shanghai to await instruction and whilst he’s there, goes for a swim in a pool that overlooks the iconic Shanghai skyline. For me, this was ridiculously atmospheric and set me Googling… the result of which is that I found the Four Seasons hotel (Pudong) in Shanghai actually has an amazing pool with views over the city.

Get the James Bond experience in Shanghai: Book into the Four Seasons, Shanghai. The cheapest rooms start at about £263 a night, but it's worth it for that pool view, surely? (What you don’t need to know is that this scene wasn’t filmed in the hotel, or even in Shanghai, but I’m not going to ruin it any more...) 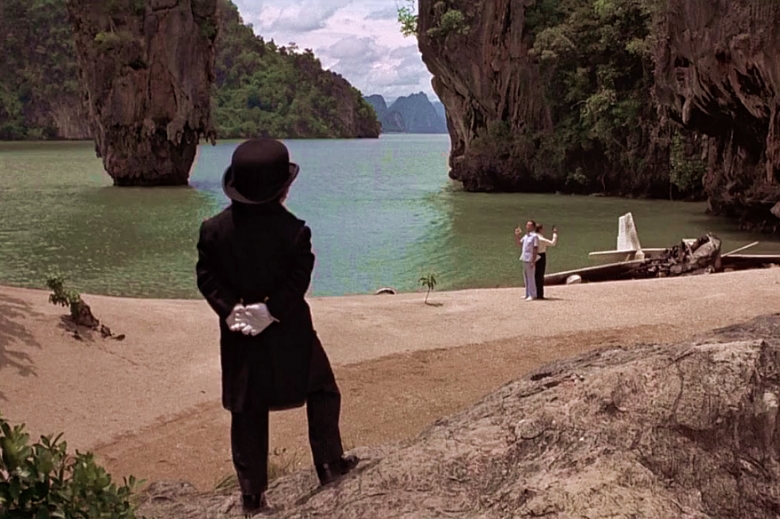 As it’s been a few years since this film was released and the twin powers of tourism and marketing have clearly kicked in, you may already know about this island near Phuket in the Thai islands.

Get the James experience in the Thai islands: Idyllic islands, lounging on a boat, cocktail in hand – that all sounds pretty Bond, doesn’t it? This 4 day Phuket to Phi Phi sailing group tour whisks you through beautiful bays and karsts and visits the (now aptly named) James Bond Island en route. For a double movie bonus, you’ll also visit Koh Phi Phi which is where they filmed The Beach. If that's not exclusive enough, why not charter your own yacht?

4. [Moonraker ] Ascend the cable car up to Sugarloaf Mountain in Rio 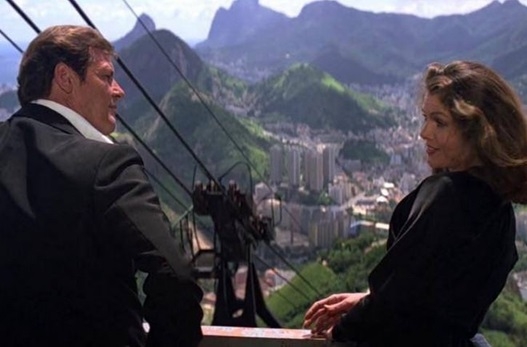 In Moonraker, Roger Moore’s Bond and his space scientist-sidekick Holly Goodhead are investigating the theft of the Moonraker space shuttle (a suitably far-fetched plot for Bond). Meeting at the top of the Sugar Loaf Mountain cable car in Rio, they’re pursued by Jaws who does the inevitable and cuts the cables with his teeth, leaving Bond to dangle precariously above the city.

Get the James Bond experience in Rio: I’ve been on this cable car and it’s quite possibly one of the most scenic rides you’ll ever take; gazing down over Rio dramatic topography of mountains and bays with the endless stretches of sand along Ipanema and Copacabana, with the Corcovado and the statue of Christ in the distance. What’s more, this little thrill will only set you back about £6, which is quite a bargain for your own Bond-esque experience. Jump on the two stage cable car at Praia Vermelha (Red Beach). Not only is it cheap, it's of the safest cable cars in the world. (That’s not very Bond though, is it? Sssshhh).

5. [Die Another Day] Make for the glaciers in the high Arctic 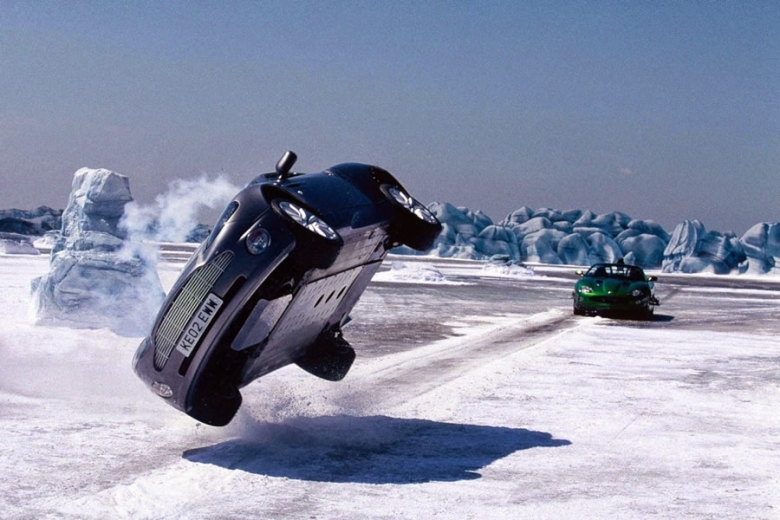 In Die Another Day, Pierce Brosnan’s Bond makes up to the Arctic circle. There's a car chase featuring invisible Jags, an ice hotel and some pesky North Koreans to contend with, but Bond is as prepared as ever to vanquish the baddies.

Svalbard is in the high arctic where you’re going to encounter plenty of ice, some glaciers and polar bears. I’m not going to lie, this one is a bit pricey, but if you’re a wildlife lover, it's something to aspire to.

Get the James Bond experience in the High Arctic: Cruises for the Arctic normally set sail from Norway and you can expect to be on board a former research vessel that's been converted to take passengers - like this Realm of the Polar Bear trip . If you're up for some Bond-worthy excursions, try your hand at dog sledding and snowmobiling whilst spotting polar bears, then book yourself into the Swedish Ice hotel in Kiruna to complete the re-enactment. 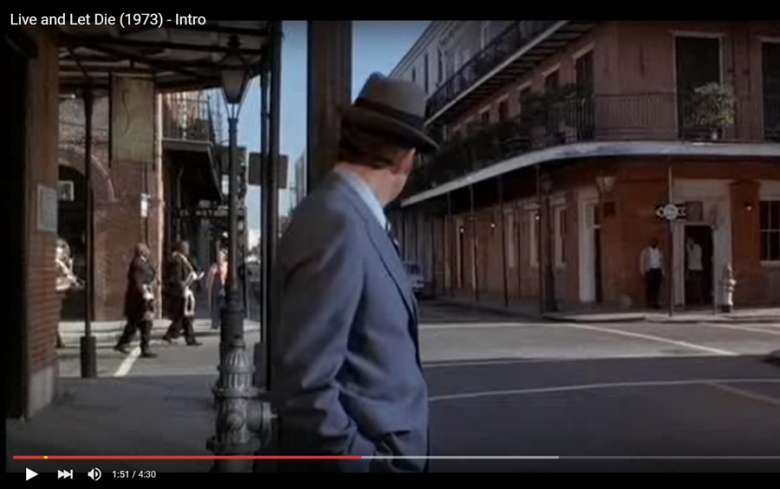 Hopefully you won’t meet the same fate as the MI6 agent in Live and Let Die who whilst strolling down Bourbon Street in New Orleans, stumbles across a typical ‘jazz funeral’. He enquires of a passer-by, ‘Whose funeral is it?’ just in time for the passer-by (aka the assassin) to spout ‘Yours!’, stab him in the side and watch as his body is subsumed into a coffin as part of the parade. Grizzly.

Get the James Bond experience in New Orleans: New Orleans and the Deep South are attractive destinations for anyone interested in the birth place of blues and jazz and maybe some hearty creole food (as Rowena discovered). You could fly here direct, or daisy-chain together a few more cities to into a longer USA itinerary. Jazz funerals take place most Sunday afternoons throughout the year. You’re welcome to go and watch or even join in the procession (stand at the back, show respect and keep quiet). Find a jazz funeral to watch here

7. [Quantum of Solace] Blaze a trail through the Atacama Desert, Chile 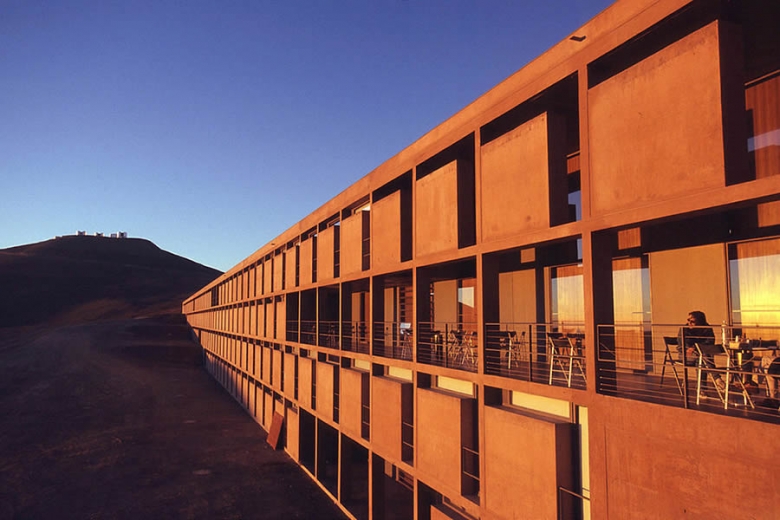 It’s easy to see why this place was chosen for a bond film location. Its futuristic architecture contrasts with the eerily barren landscape of the desert around it and belies a suitably luxurious, yet villainously remote setting worthy of a maleficent Bond plot. 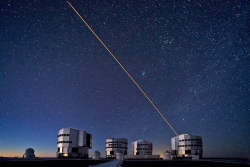 Get the James Bond experience in Chile: the ‘hotel’ in Bond is actually the Paranal Observatory, which is open to the public at weekends. There is in fact accommodation situated here, but it’s reserved for the scientists visiting and working at the observatory. To visit, get yourself to Cerro Moreno, the nearest airport. Hire a car and drive yourself – guided tours are free but you must pre-register and they only take place at weekends. (Image credit: Paranal Observatory) 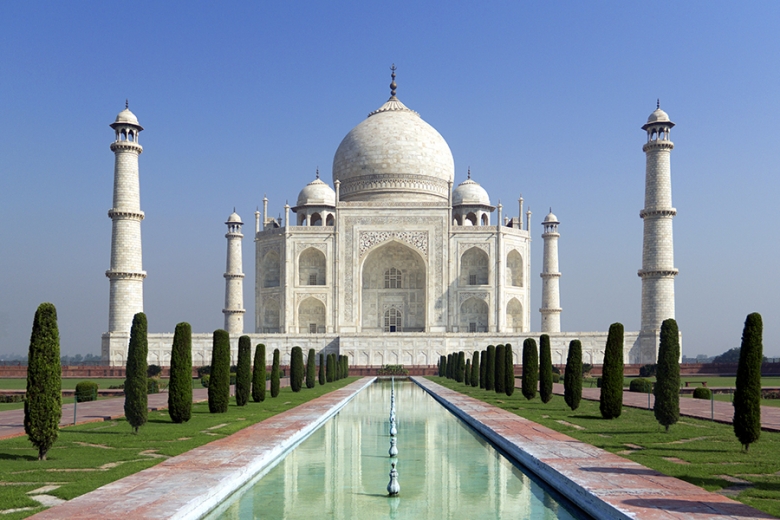 Set in the Soviet-era, the baddy is an Afghan Prince, Khan who Bond follows to his palace in Rajasthan in northern India. Whilst being seduced, Bond stumbles upon the Octopus Cult and eventually its leader, Octopussy. There are scenes of his helicopter flying over the Taj Mahal as the plot thickens in India. 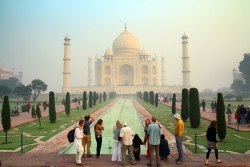 Be your own Bond in India: the Taj Mahal (which is actually a mausoleum) is in Agra, Uttar Pradesh in northern India. Most people fly into Delhi and visit the Taj Mahal as part of a Golden Triangle tour like this 10 day North India highlights trip which includes the Taj Mahal.

If actually visiting India is too much for you, get a mini (and free) James Bond experience by flying over the Taj Mahal from the comfort of your armchair instead.

9. [View to a Kill] Take to the sky above the Golden Gate Bridge

In View To A Kill, the dastardly plot is so extreme it manages to involve Nazis, evil airships and a plan to flood the San Andreas fault. Bond meets his match in Max Zorin (Christopher Walken) in a fight which finds him outside the airship, clinging to the Golden Gate Bridge. Grace Jones remarks, “What a view”, ready for Walken to retort “A view to a kill!”. Solid gold Bond right there.

I've just come back from San Francisco and on a blue-sky day, the bridge is genuinely as spectacular as it seems in the film. The reddish paint contrasts with the blue of the sea and sky and it’s so photogenic, you just can’t stop snapping. Be warned – it’s selfie-central and it’ll hook you in. 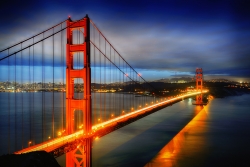 Get the James Bond experience in San Francisco: There’s free parking at either end of the bridge so if you’re on a USA self-drive, you can photograph it from both aspects. There’s been talk about adding a bridge climb experience, but nothing has materialised. If you’re dead set on an aerial perspective, airships aren’t a thing (unless you plan on hijacking one that’s promoting the newest Walmart store), but you can book a 30 minute scenic helicopter flight that goes over the bridge for about £150. As long as you promise not to jump out.

10. [Casino Royale] Stay at the Ocean Club in Nassau 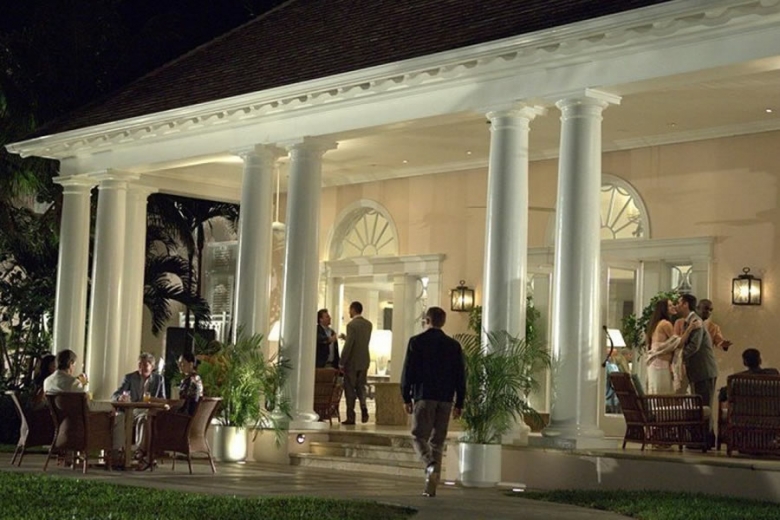 This is probably my all-time favourite Bond film. Daniel Craig’s Bond arrives at the Ocean Club in the Bahamas on the trail of Dimitrios, a terrorist financier. Before he even checks in, he manages to exact revenge on a patronising guest who mistakes him for a valet, then gate-crashes a poker game before stealing away with the prize - Dimitrios’ vintage car - and later his beautiful wife. Who could have guessed?

Get the James Bond experience in the Bahamas: This one’s not particularly tough to cross off your bucket list (as long as you're feeling flush), since the film used the One&Only Ocean Club in Nassau. Formerly a private estate, as a hotel it maintains an air of Bond-worthy sophistication and exclusivity with a to-die-for infinity pool right beside the beach that opens November 2015. Prices start at about £560 a night.

Really just want to BE Bond?

Don’t we all? Or be with him. If you’re inspired to stay somewhere you’ve seen on the big screen, or have a hair-brained itinerary in mind that takes you all over the place knocking off your personal ‘must-see’ list of locations, we can help. It might not be as difficult as you think, and with a little expert advice, we can help you get to those places and live your own James Bond experience. To start planning your trip – contact one of our round the world travel specialists on +44 1273320580 or request a quote by email.

And if you're looking for any more Bond plot reminders, in the words of Alan Partridge: “Stop getting Bond wrong”. Remind yourself of his bank holiday re-enactment of the Spy Who Loved Me: 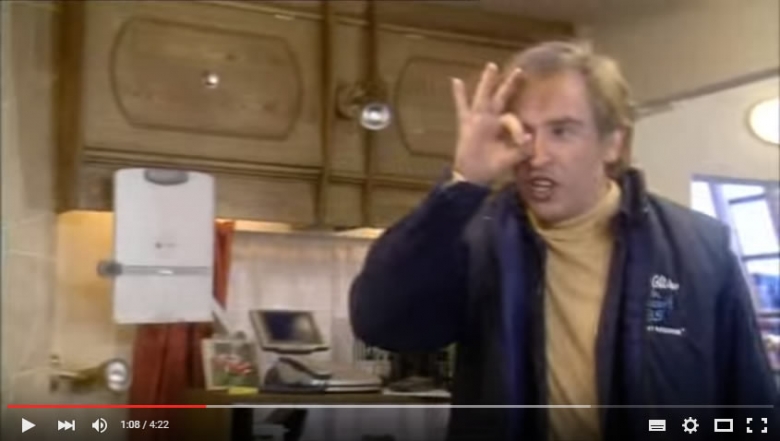 Tips for surviving your round the world flights

5 Great Hotel Views For Your Round the World Trip