If you have the opportunity to visit Sri Lanka, do it! Whether it’s a quick stop over, or your key point of interest, it’s well worth the effort to do some research in order to maximize your time spent in this destination. This past September my friend at Paradise Island Leisure gave me the unique opportunity to visit the island nation and stay at some of their most astonishing places. I'd been asked to photograph and critique his properties so I booked flights and headed over.

Prior to my trip, I had little on my agenda and didn’t know what to expect. I soon realised Sri Lanka is an action-packed destination with all you could want in a holiday or backpacking trip; beaches, culture, food, affordability, drama and surprise! Sri Lanka is just like its curry - you’ll want to go back for more.

We had 10 days to spend here and at first I thought we could visit all of the Island; I was wrong. There’s so much to do, we were only able to cover the West Coast and a bit of the centre of the Island.

I was told that Colombo was a gritty metropolis, congested and chaotic. Usually I’m totally down for visiting the capital city, getting lost in the concrete jungle and witnessing the chaos, but this time, with just 10 days to spare, I decided to head straight out to the countryside.

Colombo International Airport is located between Colombo and Negombo, so if you’re not interested in spending time in the capital, I recommend heading for Negombo. In Negombo, I stayed in Villa Sunbird, set just outside the city, about 40 minutes by tuk-tuk away from the airport. You can relax for a couple days and get over the jetlag by the infinity pool or stroll down the beach and watch the early morning fisherman drift along the horizon with the sun rising overhead. The service is exceptional: fresh made Srilanese cuisine, driving services, beach access and trip planning all in one place.

Based on my experience, I would recommend leaving Negombo in the early morning, stopping at Wilpattu National Park just for a couple hours. We found the opportunities to see wildlife in this park were limited and there are better parks to visit. Instead, drive on to the sacred sites at Anuradhapura and Polonnaruwa - both of which can be seen in a matter of hours. Make sure you are well dressed with your knees and shoulders covered and don’t forget to take off your shoes when entering religious sights.

Sri Lanka follows both the Hindu and Buddhist faiths, and both are taken very seriously. If you want to avoid crowds, keep in mind that most small towns and villages have centres of worship that you can visit. Often these are more peaceful and allow a more authentic experience - you may even get to meet the head monk. 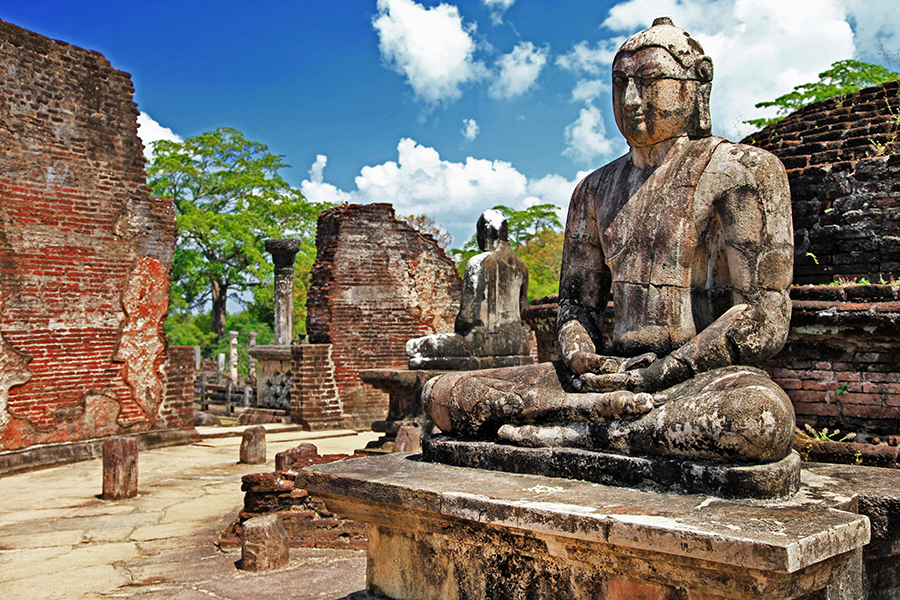 On the edge of the jungle: Habarana

Our next destination was Habarana, a small village in the centre of the island, just north of Kandy and on the edge of the jungle. It's a quiet place, but it’s the perfect stepping stone to visit Sigiriya Rock and Minneriya National Park. Most people stay right by Sigiriya as there is lots of resort-type accommodation, but we stayed in Habarana at Paradise Island Leisure’s second villa 'Sevenagama House'. As in Negombo, the service here was exceptional; a driver was a phone call away and the town is 5 minutes away. We enjoyed tuk-tuk drives to both Sigiriya and Minneriya from here during the day, and at night enjoyed lounging on our patio. 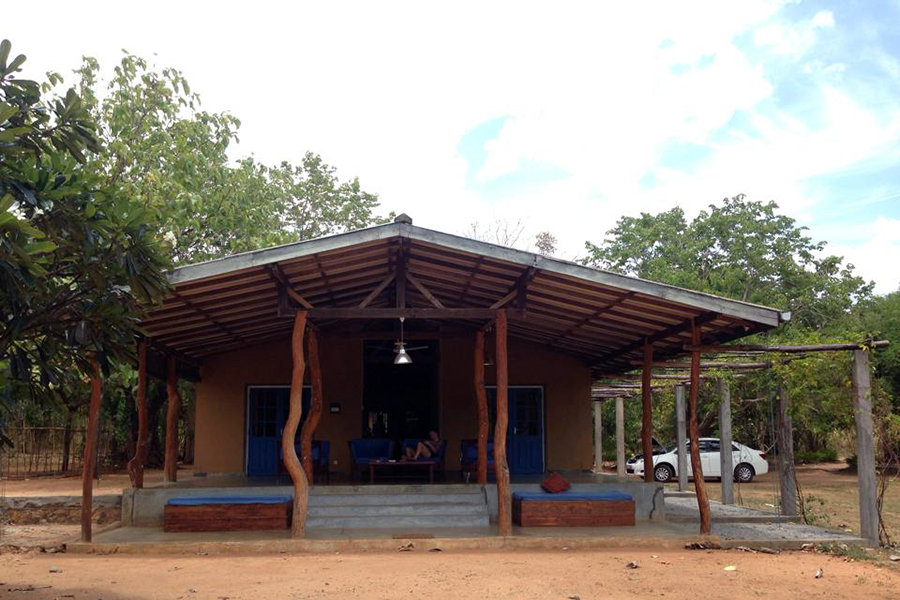 The first evening after a long day of travelling, we simply relaxed.  After sundown, we heard distant shouts and chatter in the trees far beyond the property, and when we asked the staff what was happening, they explained, "it’s the farmers. It's elephant migrating season and we're in the middle of the jungle surrounded by farms. The elephants are moving to the parks in the south, and the farmers have to check their banana fields and crops. They are communicating with each other, neighbourly asking each other if they are OK”.

Sigiriya is best seen at the crack of dawn. We got up early and enjoyed and a driver took us in a tuk-tuk to the Ancient Palace. The park opens at 7am, so be the first in the short line to grab your tickets. The admission is a bit “self serve”. If I have any advice, it is to make sure you start your ascent within an hour; firstly to beat the heat and secondly to make sure you don’t have to share the views at the top with anyone else! The panoramic view spreads for kilometres and the breeze creates a deafening silence that you can’t help but enjoy. It all becomes quite clear why this was a sought after location to build a palace. This is prime real estate. 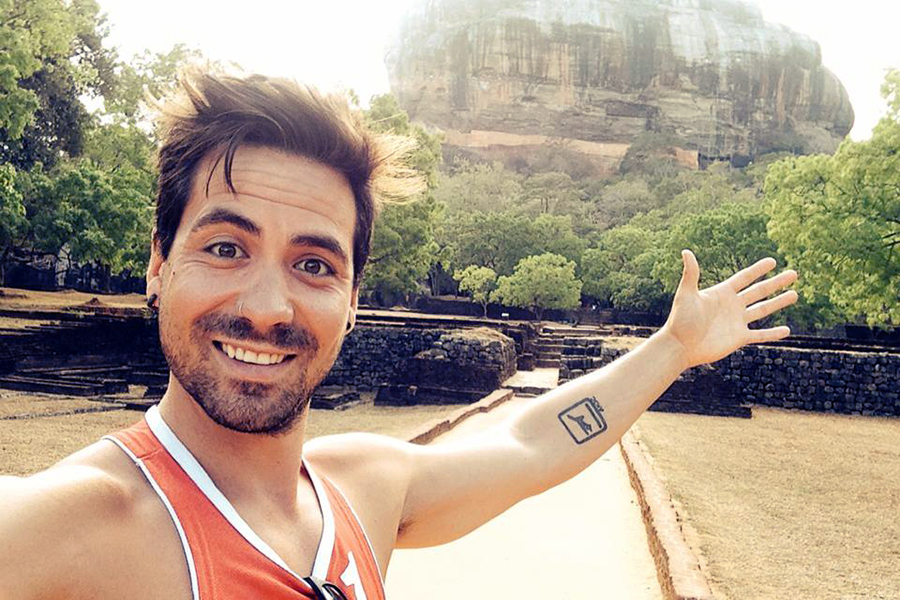 Take your time at the top, wander around the ruins and take lots of photos - before you know it, the place fills up and the staircase back down to the bottom has a waiting time.

If it's wildlife and National Parks you want to see, head for Minneriya. A few minutes after entering the park, the trees open up and you'll see vast grassland. All the parks across Sri Lanka are interlinked to allow animal migration from north to south. During September the elephants, water buffalo and cranes flock to Minneriya where the water is more plentiful. Just like other parks you'll pay for entrance, a driver, a vehicle and if the driver’s buddy is fast enough to jump on board you'll also have to pay for an animal tracker (try and avoid this - it's not worth the money and it's mostly a local scam).

Minneriya is a popular park but it's large enough that you'll only find tourists in herds where there’s wildlife about. Other than that, you can be alone in your Jeep, just ripping across the landscape with stunning vistas surrounding you. You will easily exhaust your camera. 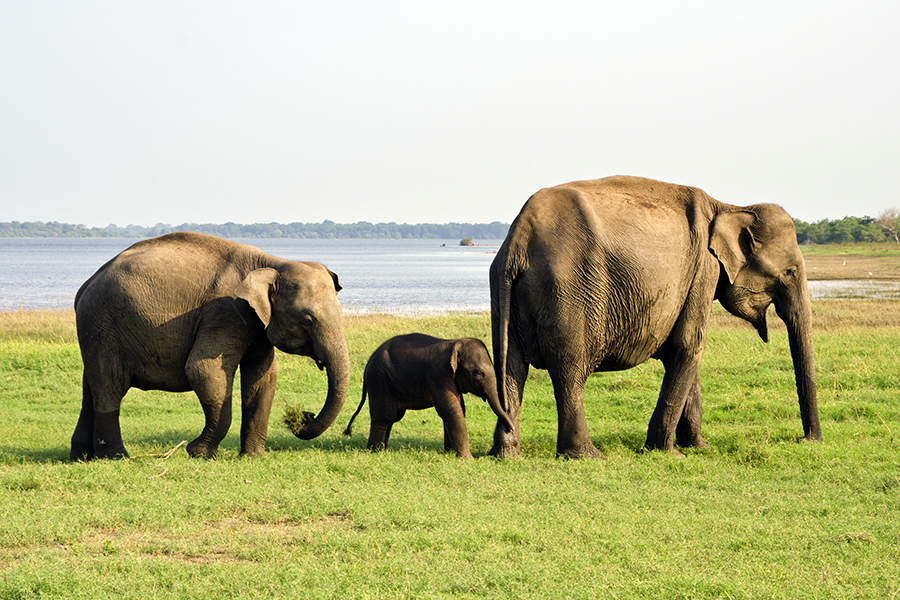 From Habarana we next headed to Kandy. It's a little trickier to get from Habarana to Kandy, so easiest mode of transport is by bus; it's also the most authentic Srilanese experience. It's packed, gritty, chaotic and fun! It was reminiscent of the loud-music-blaring bus trips I'd encountered in Thailand and Vietnam, but with richer local vibes. This time we were the only foreigners on a bus full of people travelling to start their regular daily grind. Music blaring, kids laughing, parents reading; it was the real experience. It took about 3 hours to get from Habarana to Kandy but the time flew by, keeping us busy with people-watching while the countryside flew by outside the window. 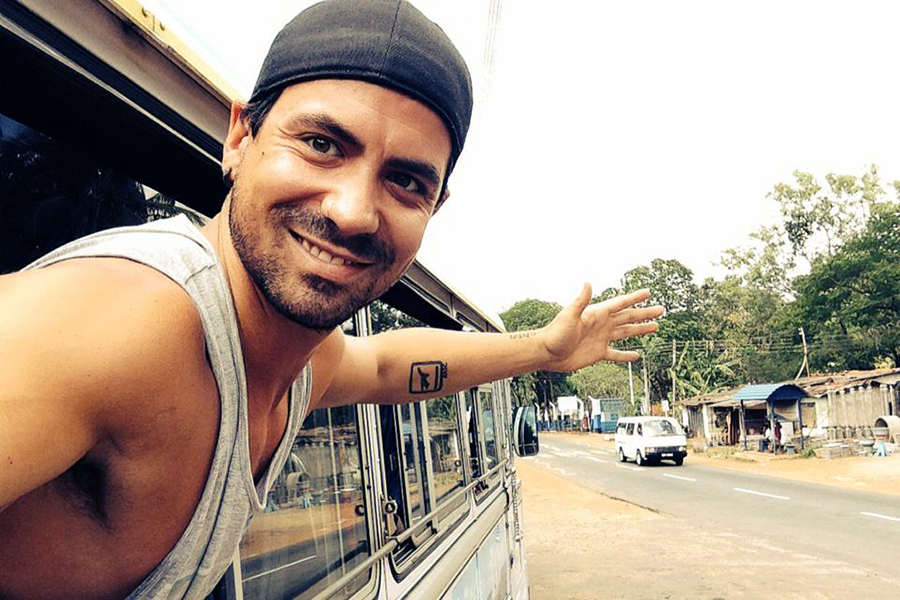 Before we knew it, we'd arrived in Kandy where the market was stirring, people were buzzing and there was a great atmosphere. The main attraction in Kandy is the Temple of the Tooth: historically, the Srilanese went into India to reclaim remains of their Buddha after he perished and all that came back was his one tooth. We skipped the actual museum as the guide book mentioned that the tooth itself is only on display a couple of weeks out of the year. If you're really keen to see it - you'll pay about £10-£15. Other than that, Kandy is pretty low key.

We spent the rest of the afternoon walking around town and visiting the Cultural Kandian Dance show (the 'must-do' tourist event). This was the first time we'd really seen other tourists - we'd become so accustomed to being the only visitors, so this was a timely reminder that Sri Lanka is an up and coming destination. We had booked into a hostel for the night then decided to research train times to see how early we could head down to the south coast. 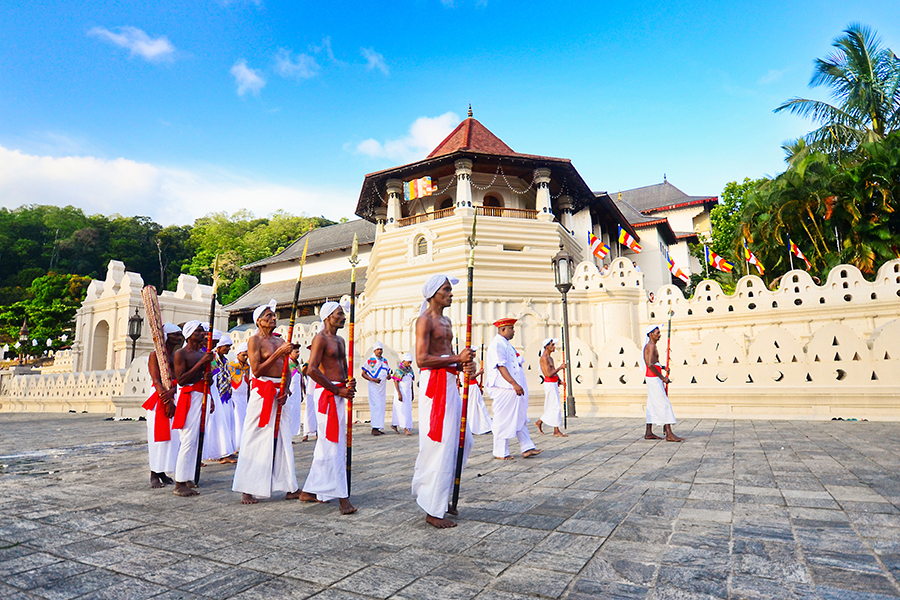 At the train station, we were told there was a departure the next morning at 4.20am and that we needed to arrive at 3am (!). Next morning, we collected our tickets and found a seat in the second class train (there’s no such thing as first class in Sri Lanka). As we neared the first town, we realised why we'd been told to arrive early; the cars quickly filled up and soon there was nowhere to sit. If this is how full the cars get after one stop - it was going to be a long journey!

After 4 hours, people were shoulder to shoulder and the temperature was climbing. It was almost unbearable - but still remained exciting. This was a day to day ritual: young working men living in the country side, boarding trains at ridiculous-o’clock to commute into Colombo for their daily jobs. 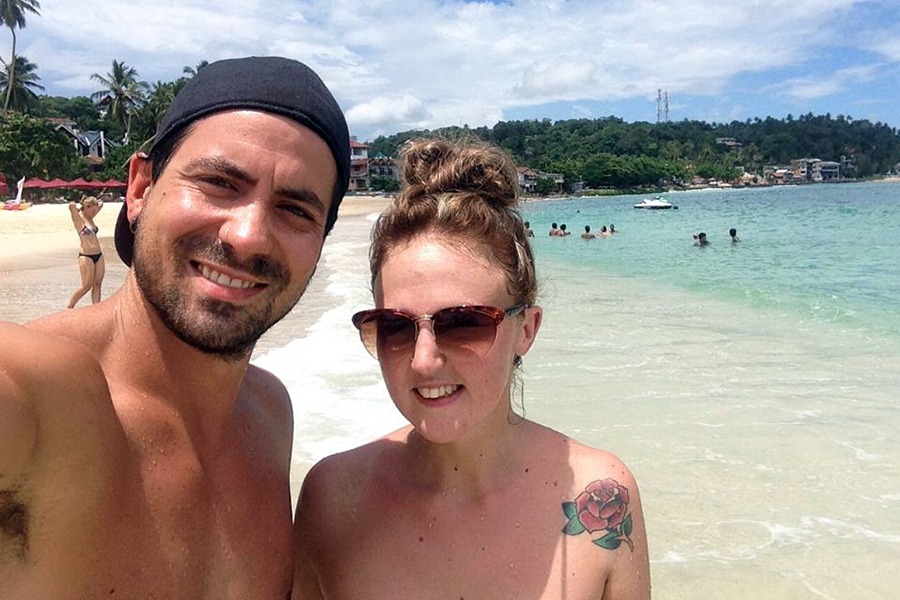 Galle is a fortified Dutch city on the south coast, surrounded by a citadel and it's part of the up-and-coming backpacker route and you reach it just before Unawatuna. But if you want to make the most of your time, head right to Unawatuna - 15 minutes further on the train. Unawatuna is the place to be if you crave the backpacker buzz. Over the last 10 years as Sri Lanka has become more popular, Unawatuna has evolved massively. What once was an un-inhabited quiet cove is now buzzing with backpacker accommodation, restaurants and pubs.

It offers the vibe that the beaches of Phuket and Koh Phi Phi would have had 20 years ago. You can easily spend 2-3 days on the beach or skipping from pub to pub. Rather than basing yourself in Galle as we did, stay in Unawatuna and lap up the atmosphere, it will be more efficient to travel into Galle for the day and walk around than stay there and head into Unawatuna. This is definitely the place to be. 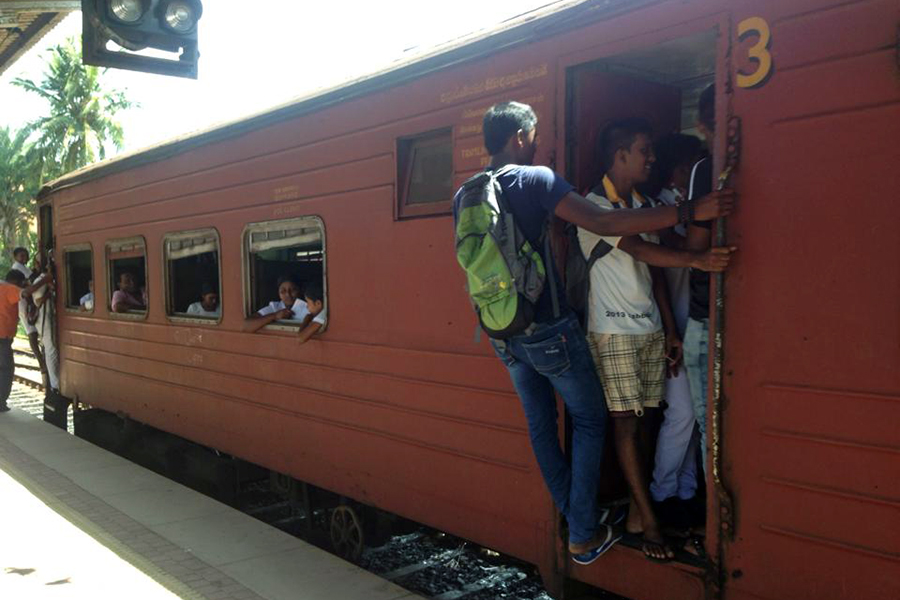 I’m glad I had the opportunity to visit Sri Lanka which wasn't previously on my bucket-list! As word gets out about how great a destination it is, I expect more and more backpackers will be flooding in. There is already a small footprint of all-inclusive resorts and high-end accommodation, so make sure you make Sri Lanka your destination before it takes over and there is still a level of authentic local life to experience.

How to do this trip

In Sri Lanka, you'll arrive into the capital Colombo - check out these ideas for multi-stop tickets that include Sri Lanka and we can book direct flights too:

Accommodation, tours and getting around

It's easy to hire a driver in Sri Lanka and explore independently, which we can arrange for you. If you want to explore with others as part of a small group that covers a similar itinerary to my trip, check out these tours:

If you’d like to explore Sri Lanka and don’t know where to start – we can help! We can suggest an itinerary or help you tailor-make a trip including tours and accommodation. For more help and ideas, get in touch with us. Here are some ideas for how to include Sri Lanka in your RTW multi-stop itinerary:

A journey from Rio to Iguazu Falls with a small group

My Spitsbergen expedition: journeying into the Arctic

Antarctica Cruise to South Georgia and the Falklands