There’s something more than a bit sexy about Brazil. Think samba on the beach at sunset, intense Latino vibes, buzzing cities, thick jungles, crashing waterfalls, a wealth of tropical wildlife and the biggest street party on the planet. Brazil really does have it all. If you’re looking for somewhere diverse, it’s a sultry South American cocktail that is sure to send you dizzy.

Talking of cocktails, no visit to Brazil would be complete without sipping on a few scenic Caipirinhas. The national cocktail is a heady mixture of crushed lime, sugar and cachaça, a local liquor fermented from sugarcane. It’s refreshing, sweet, tangy and swoony at the very same time.

Brazil has Caipirinhas coming out of its ears, so you’ll have no trouble tracking one down. However, for a cocktail to remember, try out Top 10 spots to sip a Caipirinha in Brazil.

1. Join the party in Rio

If there’s one place to try a Caipirinha, it’s Rio. People in Rio know how to party. That’s an understatement. The locals are larger-than-life, the city pulses with energy and the nights are deliciously long. There is nowhere quite like it. 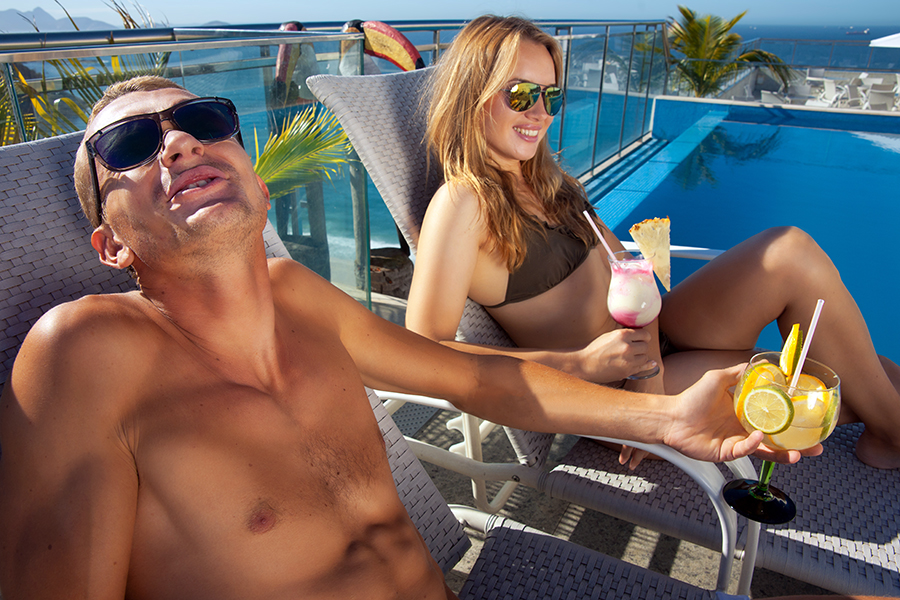 So, when in Rio, throw yourself right in. Try a caipirinha at Bar Urca, with a brilliant view of the statue of Christ the Redeemer, sit on Ipanema beach with a cocktail and a smile, or spend the evening living it up in Lapa, Rio’s bohemian, young and arty quarter. Whatever you choose, you won’t be sorry. Why not take advantage of our three night Rio City Stopover and Samba your way through this must-see city!

2. Sail through the Amazon in style

Now, this is something pretty unbeatable. Swing gently in a hammock on the deck of a steamboat with a Caipirinha in hand as you drift along the jungle-flanked Amazon. All around you, the rainforest will echo with trills, whoops and squawks. With any luck, you might even spot a macaw or two. It sounds like a daydream, and it is almost too good to be true.

Riverboats are a great way to explore the Amazon. Along the way, you can hop off for jungle treks, canoe trips and wildlife safaris. Then, after an action-packed adventure, you’ll head back to your steamboat to eat, sleep and relax. In between excursions, you can declare your happy hour and order another Caipirinha. Bliss.

Surreal and spectacular, this is something extraordinary. Taller and twice as wide as Niagara, spilling 553 cubic feet of water per second, Iguazu Falls is stunning at any time of day. Rainbows pop up all over the place, spray sends mist exploding into the air, and the surrounding jungle is deep, densely green. It’s enough to give you goose pimples.

On Full Moon nights, it’s possible to take a Moonlight tour of Iguazu Falls. First, dinner, Caipirinhas and live music and then a guided walk out into the Naipi site. Here, you can take an elevator to one of the best viewpoints, with the milky moon looming large over the crashing water. Sometimes, you can even see a silver rainbow. Wonderful.

Our 3 night Iguazu Falls Stopover package is the perfect way to discover the world's most spectacular waterfalls!

4. Toast the panthers of the Pantanal

The Amazon might get all the press, but the Pantanal gets all the wildlife. A huge wetland region over half the size of France, reaching from central Brazil to Bolivia and Paraguay, the Pantanal is one of the world’s greatest wildlife destinations. There’s a mind-scrambling diversity of wildlife here, from toucans to caimans to capybaras to macaws to piranhas and giant otters. It’s also only place on the planet where you’ve got a decent chance of spotting a wild jaguar.

So, after a day of piranha fishing, jaguar scouring and tracking giant otters from a dug-out canoe, you can kick back at your Pantanal pousada with an ice cold Caipirinha. Here, it’s definitely worth splashing out on a decent lodge offering a menu of awesome animal adventures. You’ll get the wildlife experience of a lifetime and some very tasty cocktails to boot!

5. People-watch from a colonial plaza in Paraty

Paraty is the jewel of Brazil’s Costa Verde, just 3 hours from the Rio’s hectic pace and hedonism. Packed with Portuguese colonial buildings, cobbled alleys and colourful houses, it’s like a living museum. Here, you can pull up a seat in a shady plaza, order a Caipirinha and watch sleepy life in Paraty unfold before you.

While Paraty’s historic centre is steeped in atmosphere, it’s also a brilliant place to hit the beach. With over 200 nearby islands and 65 beaches lining the coast, the only tricky part is deciding which beach to hit! It’s a great spot for tropical boat trips and cheeky afternoon cocktails on a postcard-worthy beach.

6. Get exotic on Ilha Grande

Ilha Grande is pretty much paradise. With long crescents of silky white sand giving way to crashing turquoise waves and an interior composed of virgin rainforest, it’s about as good as it gets. It’s the perfect place to soak up the sunshine, explore the jungle and slow down the pace. You’ll be pinching yourself all the way. 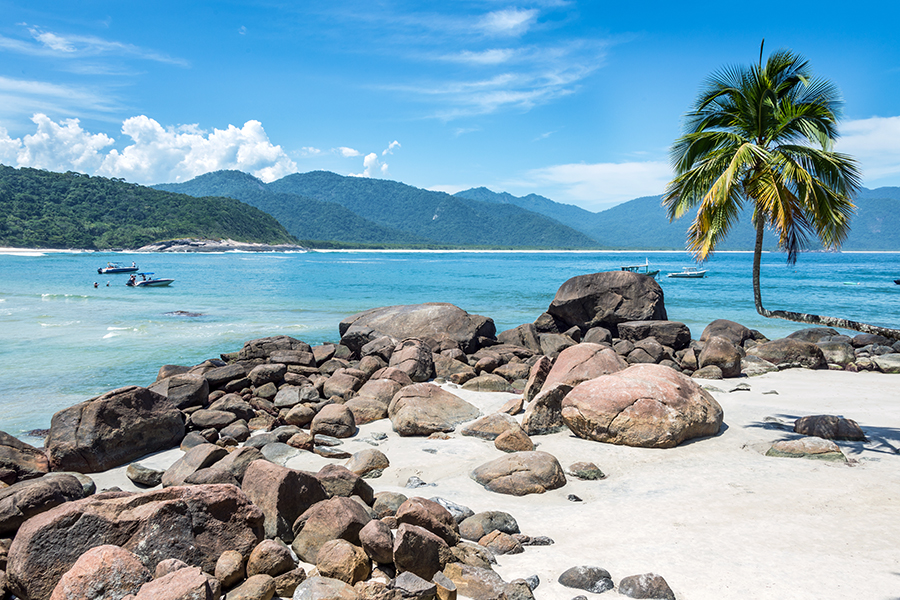 Once a pirate haunt, then a leper colony and then a holding bay for political prisoners, the island has a chequered, colourful history that has so far kept developers at arm’s length. There are no cars, no roads and no worries on Ilha Grande. Simply head for a rickety beach bar at sunset, grab a caipirinha and count your blessings.

7. Samba the night away in Salvador de Bahia

Sultry, steamy Salvador de Bahia is a highly spirited city. Perched at the mouth of sweeping bay of Todos os Santos, its natural setting is truly stunning. Salvador also holds the title of the oldest city in Brazil, and Pelourinho, the historic district is a patchwork of cobbles, pastel-coloured houses and grand colonial churches. Add to this the electric Afro-Caribbean culture, and you’ve got a Latin America city that’s easy to fall in love with.

8. Catch an Emerald Sunset in Jericoacoara

Jericoacoara, or ‘Jeri’, is hard to reach and even harder to leave. Set inside a remote national park at the northern tip of Brazil’s eastern coast, it’s a heck of a journey to get there, but it’s worth the effort a million times over. A hippie commune and backpacker haven with great surf, soft sand and all kinds of activities up for grabs, Jeri is an all-round winner.

Every night at sunset, a small crowd gathers on the mammoth Pôr de Sol sand dune to watch the sun sink into the ocean. Here, you can grab a Caipirinha from a passing cocktail cart and settle in for an incredible natural light show. At the tail end of the fiery sunset, the sun turns bright green for just a few moments before dipping into the sea. It’s spine-tingling stuff.

9. Turn back time in Ouro Preto

Ouro Preto is one of Brazil’s most beautiful colonial towns, tucked away at the feet of the Serra do Espinhaco. Designated as a UNESCO World Heritage Site, the town is a hilly jumble of colourful houses, baroque churches and traditional plazas. Strung along the ridge at the top of the town, there are 23 churches towering above the valley. It’s a steep climb to get there, but the views are to die for and in certain spots you can see all 23 at the same time.

After a hard day of hillwalking, you can head back to town for a well-deserved cocktail. Or three. Ouro Preto is a university town with youth, vibrancy and a strong artistic streak. The bars are always a-buzz, the restaurants are often set within grand colonial buildings and the atmosphere is simply brilliant.

Búzios. Boozy by name, boozy by nature. This is THE place to take a sophisticated sip on a classy Caipirinha in a swanky seaside bar after an afternoon of credit-card bashing in the town’s boutiques. The St. Tropez of Brazil, Búzios is the playground of the upper crust.

Brigitte Bardot takes credit discovering the beauty of this once-humble fishing town with her boyfriend in the sixties. Since then, it has been adopted by the affluent and become a coastal darling. With beautiful beaches, cobbled streets, fine dining, and a great nightlife, there’s really nothing not to like. If you stay here, you’ll feel like a million bucks. You might spend it too.

If you’d like to visit Brazil as part of a big trip, or as a single destination trip, we can arrange multi-stop flights and tailor a trip with all the accommodation and tours you’ll need to explore this country inside and out!

Simply call us on +44 1273320580 or request a quote by email. Here are example multi-stop flights that include Brazil:

About the author Bryony Dunn

Bryony is an explorer in every sense of the meaning. In 2013 she took the plunge, quit her marketing job and decided to face down her lifelong panic disorder to begin life as a freelance digital nomad. Journeying all over Asia, for years she earned her keep writing for travel brands. Almost by accident, she ended up in Cali, Colombia where she discovered a remarkable (as yet latent) talent for Salsa dancing. After spending a year in sequins shimmying from dance show to dance show, she returned to the UK, tanned, toned and ready to settle down. Bryony joined Travel Nation as a round the world specialist in 2016 and is currently working as a marketing specialist, with a little salsa on the side.

Business class round the world tickets - are they worth it?

7 Reasons to visit Canada in autumn

Which destinations could be first on the UK travel ‘green list’?